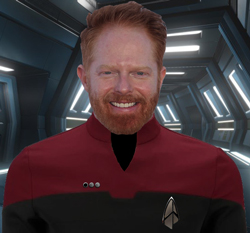 Andrew Callaghan is your typical family, hailing from the planet Earth and born into a large Irish family. Coming from a family with a sigificant Star Fleet history, Callaghan has struggled to build a name for himself. While skilled and gifted, his career has been marred with mediocrity. Having been a Lieutenant Commander five years, he's looking for that push that will move him up the ladder, and hopefully into his own command.

Born on the 24th of December 2375, Andrew Michael Callaghan is the only son of Commodore Cullum Callaghan, a Professor at StarFleet Academy, and Commander Helena Callaghan, M.D.  Raised on Earth, with his family who worked for Star Fleet;  the expectation was set high from an early age.  While the Callaghans were loving parents and cared for their children; Andrew and his father struggled in their relationship.  The Senior Callaghan stressed that Andrew’s future was Star Fleet and tended to treat the boy differently than his sisters; in hopes of molding him to what he saw in his mind.

Freshman Year: Andrew adjusted into StarFleet life faster than most of the Cadets in his class.  As far back as Andrew could remember his father ran their house in a manner that mimicked Star Fleet’s life.  The Callaghan child was prepped as a child for rigid schedules, inspections, and physical exercise.  So, for the Callaghan Cadet, Star Fleet didn’t present a challenge.  Given his attention to details, schedules, and organization it was no secret that Cadet Callaghan selected the Operations Track with an emphasis on ship operations.  For the most part, freshman year wasn’t too eventful, things honestly went according to plan.

Sophomore Year: Andrew’s second year in the Academy is where the Cadet started to slip.  With his first year being so easy, the Cadet tended to find himself becoming relaxed; even lazy.  It was the first time, in some time, that Andrew truly felt he could be himself.  While he still sailed through the Academy when it came to physical exercise and military aspects, his educational training started to fall behind.  Andrew’s second year was truly a test of his determination when he was threatened with expulsion after failing a class.  Andrew had lived under his father’s roof for so long that he never questioned his career; it was always expected he would join StarFleet and continue the Callaghan tradition.  While many saw the potential and ability, the same people also saw a lack of drive and passion.  Most of Andrew’s second year was just him going through the motions.  It wasn’t until the Dean of Students threatened to kick him out that Andrew realized he had to take things seriously.  There was no backup plan.

Junior Year:  It wasn’t until his Junior Year that Andrew picked up Diplomatic Relations, with a concentration in Cardassian Affairs as a minor.  As his course work continued to get more and more challenging Andrew realized the need to find an out; something that took his mind off of things and allowed him to refocus his mind.   His Diplomatic classes did just that.  While his basic work was challenging, it didn’t provide that true challenge.  His minor in Diplomatic Relations was something he truly had to work at.  It wasn’t natural nor easy.  He struggled and took pleasure in the struggle.  Despite the extra work, Andrew found the work in the Diplomatic Track to be rather enjoyable.  H

Senior Year: By his Senior Year Andrew was in his stride.  He wasn’t top of his class, but he wasn’t near the bottom either.  Andrew graduated from the Academy with no additional awards or commendations.   This was a sore subject for Andrew’s father, as he felt his son hadn’t tried.  The fact his son graduated in the mid-range was a disappointment and he made sure his son knew it.  Refusing to attend his son’s Academy graduation was the turning point in the two’s relationship.  Andrew has never forgiven his father.

As a newly commissioned Ensign, Andrew found his first assignment aboard Starbase 24 working on the night shift, as an Operations Officer.  The station gave Callaghan an experience that he hadn’t had, up until this point.  Having grown up on Earth, and spending most of his childhood there, Callaghan enjoyed being away from dry ground.  Meeting new species, new people, and experiencing the seedier side of the Federation was right up the Ensign’s alley.  While his career on the station was boring, after all, how much fun can the night shift be, he thoroughly enjoyed his time at the station.

The year 2382 saw a big change in Callaghan’s life.  Reassigned to the USS Miami, as their second shift Operations Officer, Andrew was given a promotion to Lieutenant Junior Grade.  The USS Miami gave Andrew something that the station couldn’t have; a mobile life.  Up until this point, Andrew had always lived a stationary life with everything he needed right there at his fingertips.  Gone was the amenities that came with a base posting; no more fancy shops, or promenades.  While Andrew considers his assignment on the USS Miami to be a positive one, it did end on a rather low note.  During a Diplomatic mission to Draia VI, Andrew had a liaison with a young female Diplomatic aide.  Andrew lucked out in the fact he wasn’t demoted, but he was transferred off the Miami.

The USS Portland found Andrew back on the night shift and working as a Communication Officer filtering messages to and from the ship.  It honestly was a boring job with nothing to report.  Andrew didn’t enjoy his time on the Portland but understood that things could have been much worse.  His tryst with the Diplomatic aide of a foreign government was forbidden.  Andrew has no proof and isn’t brave enough to ask, but he’s confident his father pulled in a few favors, a fact that helped save his career.  Taking his position seriously Andrew buckled down and worked hard.  Over time, he worked his way back to the day shift, and even picked up several bridge shifts, before being transferred to the Hartford.

Much to Andrew’s surprise, his position on the Hartford gave him a bump up to the Assistant Chief of Operations.  While still not a glamorous role, it allowed him to supervise staff members, work on duty assignments, and leadership within his department.  In simple terms, he had bridged the gap from Junior Officer to leadership and he enjoyed it.  Andrew had never considered command as a viable career path.  Having grown up with an overbearing father, he wanted nothing to do with leadership.   However, the Hartford changed his mind, and now he had a vision ahead of him; the center chair of a starship.  Earning a promotion to full Lieutenant, Andrew felt he was on track and soon found himself accepting a Chief of Operations post aboard the older USS Concord.

The Concord gave Andrew his first real taste at actual leadership.  It was here that he was a Senior Staff member, and in time took over for the retiring Second Executive  Officer.  However, like most of Andrew’s previous assignments, this posting was rather mundane.    He had overseen several Away Missions, sat Bridge Watch on numerous occasions, and even was left in command several times; but the ship never saw any real combat or major operations.  The Concord was fleet support, and Andrew knew that in order to get his own command something was going to have to change.  After serving on the Concord for six-years and earning a promotion to Lieutenant Commander, Andrew was offered a rare opportunity, one he couldn’t pass up.  Andrew’s former XO, from the USS Hartford, had been given his own command; his first act was to offer Andrew the First Officer position aboard the USS Raleigh.

Unknown to Andrew the Raleigh had been assigned to deep space exploration, not entirely the assignment when one is looking to get a command of his own.  While the Raleigh certainly honed many of the skills needed to command, it didn’t offer Andrew those assignments that Admiral’s took notice of.  Most of the Raleigh’s missions were exploration, and scientific.  The one thing that the Raleigh had that changed Andrew’s life was a Medical Officer, Lieutenant Megan DuBois.  Megan and Andrew hit it off almost immediately and when off duty the two were rarely separated.  Andrew would like to pop the question, in time, however, he feels he needs to know what direction his career is headed in before he can do that.

After two years on the Raleigh, Andrew was recalled to Starbase 72, pending a new assignment.  While he has submitted his application for a command, he is confident that his career has been rather mediocre at best.  He is looking for that one event, to push him over the edge and into the center chair.  In an odd twist, Lieutenant DuBois was also recalled to Starbase 72, awaiting her next assignment as well.