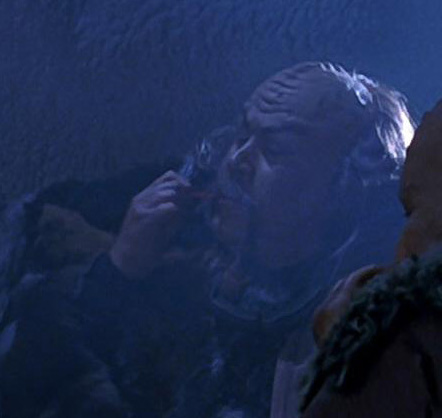 Torak, more formally known as Torak the Fat, was a renowned Klingon archaeologist, turned pirate and treasure hunter and sometimes grave robber. Relative to most Klingons, Torak is short and portly. Years of overindulgence have bloated him. He dresses in clothing that once would have been considered fine and stylish, though the years and multiple alterations to fit Torak's expanding girth have caused the garments to, like Torak himself, lose their luster.

Torak was once a respected archaeologist, known on both sides of the Organian Treaty Zone. He was one of the only Klingons granted access to Federation space, though always working in tandem with Federation archaeologists. Occasionally, he was invited to present at archaelogy and anthropology conferences.

The Klingon had a not-so-secret life, however, as a mediocre gambler. It was the only way he could maintain his garish lifestyle. What little luck he had, though, eventually ran out, and he found himself in debt to a high rolling Orion underworld crime lord. Torak put his expertise to work for him, becoming treasure hunter and, in some cases, grave robber. As he scraped together the debt payoff, while simultaneously staying ahead of the Orion’s goons, he developed a taste for the lifestyle of a thief and pirate. With the prospects he sought, he was able to cobble together a crew of ne’er do wells of many different humanoid species and build a ship, the Half a Chance, out of stolen parts from all the major galactic superpowers. He now plies the spacelanes in Federation, Klingon and Romulan space, as well as both neutral zones, always looking for the big score that will allow him to retire.

In 2292, he nearly succeeded in plundering the U.S.S. Minerva (NCC-1882) for its deuterium and auxiliary fusion reactors, but the Minerva crew successfully repelled the boarding parties, forcing Torak to retreat.