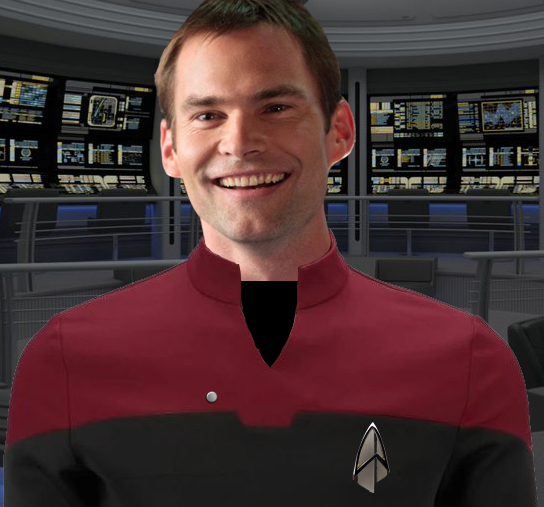 Randall Edward "Red" Jarvis is the chief flight control officer of the U.S.S. Sagan (NCC-79831), a Nova-class starship assigned to explore and patrol the Gavarian Corridor. This is his first deep space assignment after a demanding position in the Advanced Starship Design Bureau's test flight program at Utopia Planitia in the Terran System.

Red was born in 2373 in Tycho City on Earth’s Luna Colony. At an early age he learned about Earth’s spaceflight history from his mother, who was a curator at Luna Colony’s Mare Tranquilitas Museum. Young Red was inspired to space travel the first time he saw the primitive examples of spacecraft at the museum, and the perfectly preserved “Tranquility Base” exhibit.

At Tycho City’s Dave Bowman High School, Red excelled as captain of the school’s competitive acrobatic flight team, the Shooting Stars. On occasional trips to Earth, he was turned on to unpowered flight in primitive gliders. His affinity for risk taking and putting his fate in his own hands and the direction of the wind led him to apply to Starfleet Academy. Thanks to a friend of the family who was well-connected with Earth’s Federation Councillor, he received an appointment, and reported to the San Francisco campus in 2391.

Red quickly endeared himself to the Yeagher Squadron flight team’s cadet commander through a combination of sucking up and purposely losing credits to him during poker games in the Yeagher Squadron wardroom. His brash manner and daring maneuvers earned him the respect of his fellow cadets, even those in the other squadrons.

Unfortunately, the attention made him even more cocky than he was before he arrived, and he developed a penchant for rule breaking and testing the limits of Starfleet regulations and discipline. He regularly racked up a collection of demerits that put him out of the running for the good conduct citations that would have ordinarily fast-tracked him to command training.

If it bothered him, Red didn’t show it. He was having too much fun flying, pushing the Academy training craft to their limits and regularly breaking his own best times on the Academy’s Saturn Flight Range.

His first class year, he pulled a stunt that nearly got him expelled. Putting together a team at the beginning of that year, he oversaw the construction of a working replica of a Mercury Redstone rocket and capsule. The site was off-campus at an old Navy yard abandoned in the late 21st century. An engineering cadet had collected the alloys to construct the components, a chemical engineering cadet synthesized the fuel and other cadets served as project assistants. Toward the end of the academic year, with Red in the capsule, the team of cadets launched the rocket. The result was a planetwide alert that had not been sounded since the end of World War III. All the sensors detected was the launch of a chemically propelled vehicle, and computer tactical analysis assumed it was a nuclear missile.

Privately, Red’s chief flight instructor, Commander Steven Conrad, was impressed at the cadet’s gumption and the leadership required to mount such a project. Publicly, the Academy took it lumps from United Earth officials, and so did Red. In exchange for the rest of his team merely having reprimands on their records, he agreed to repeat his first class year.

His repeat year was uneventful. He spent a lot of time on the flight range, and Conrad had even tapped him as an unofficial teaching assistant for the fourth-class cadets. When Red graduated in 2396, he was commissioned as an ensign, and assigned, at Conrad’s recommendation, to the Advanced Starship Design Bureau’s Test Flight Division, which Conrad himself had been appointed to lead.

While most of his fellow officers in the test flight program gravitated toward the larger starships, Red was drawn to the smaller spaceframes, the more maneuverable scouts, runabouts and auxiliary spacecraft. He fashioned himself as the go-to pilot for testing theoretical designs of those classes. He soon grew bored with hanging out at Utopia Planitia with the other test pilots, and, against vehement protest from Conrad, requested deep space assignment.