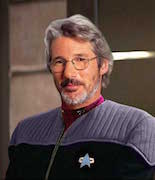 Very stable and dedicated to Starfleet, Caymen seemed to have been born to lead. It came naturally to him as a young lad, and has prevailed throughout his career. As the years pass by, Caymen seems to gain the respect of peers and enemies alike. His undying passion for peace and non-chaos drives him like nothing else. Caymen speaks in a gruff tone, mostly due to age at this point. He was always a very direct and deliberate person, confident in his own decisions and in following orders, even if they happened seconds before he spoke or acted. But he is formal in most discussions, and yet doesn’t beat around the bush. Even in his diplomatic roles he was always straight forward and sometimes blunt. But that attitude has served him well.

Greener has served on many ships and in many capacities, but it was Helm and Operations, along with a desire for command, that drove his career – pun intended. He was a gifted pilot and systems operator, and was also a great tactical advisor it would seem. His fervent studies as a child and at the academy paid off as he quickly rose to an Acting CO stint on his second ship in less than 10 years of graduation.

And following this stint, he was given his first command – the Endeavor, one of many ships to carry that name. This was a battle cruiser, and one that would earn its stripes if it ever could. There was a war, a small war, breaking out under Greener’s command. He and his crew would fight Species 8472 for many years, culminating in a high-stakes battle. The ship would be lost, but the enemy’s mother ship would be destroyed. The end of that almost-five-year tour was the end of an era for Caymen, but not the end of his career.

Greener was given more of a desk job, although he still left the confines of the station to which he was assigned. He would command Starbase T’Plana Hath, including several attached vessels. This would be a multi-tasking, highly-strategic role, and would introduce him to more diplomatic situations than before. He would also meet his wife during this time… and unfortunately lose her all the same. The Maquis were avenged eventually, but that never cured that loss. Only time and continued duty could and would help him. And he was the stronger for it.

He could have been promoted into the admiralty after a few years on the station. Instead, he chose a civilian role. He still had links to Starfleet through the diplomatic corps, but he took on the role of Ambassador for the Federation. Given his kinship with several Romulans, and his work with the RSE, he was assigned to the Romulans, still based out of T’Plana Hath. There he worked feverishly to mend the Federation and Romulan relations. The two institutions had so much to gain from each other, and yet they could never quite figure out how to make it work. It would turn out that the destruction of a planet would do the trick… long into his retirement.

When he retired, he did so willingly and gladly. Of course he missed the action and the servitude. But Caymen was glad to take a rest, back on his now-homeworld of Xatria, in a cabin in the woods. He stayed in touch with his former comrades in the Federation and Starfleet – being retired didn’t mean he didn’t keep a subspace beacon handy. But it was a good life, and not once did he look back up at those stars hoping to get back. He was fine on the ground.

He was eventually asked to return to service once again, trying out an experimental class of ship, the USS Sinnan. That did not turn out to be a cost effective scout and intel ship, and Greener was dispatched to the Gamma quadrant with his old command, under a new commission, the USS August.