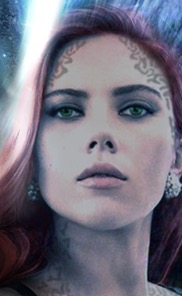 Isabelle is an attractive young woman. Even though she's half Trill she still has the full range of Trill spots that go from head to toe. Distinguishing Characteristics Isabelle has severe scarring all over her back from a fire she was caught in that almost killed her. She had had several operations but still has a lot of work to be done before her skin is anywhere near perfect again.

Born on Betazed in 2366, Isabelle spent much of her early years travelling back and forth between starships, starbases and Betazed especially when it was realised that she had developed her Betazoid abilities extremely early. She spent a lot of years training to control her abilities, attending specialised schools as she grew up.

At the age of sixteen Isabelle was involved in a serious fire at the Betazed University campus. The fire, was set to cover up any traces left by an assailant who had raped her shortly beforehand. She and another student were critically wounded but after a long period of recovery and several operations Isabelle eventually returned to her normal life. Her assailant was, unfortunately, never found.

By the time she reached the age of eighteen she had already decided that she wanted to join the Federation and with her father’s endorsement she was accepted into the Academy. She was a well liked student but suffered from bouts of stress due to her Betazoid abilities, she plowed on nonetheless and graduated four years later with honours.

It was during her early career aboard the USS Kirk that she volunteered to be a host for a symbiont that would not have otherwise survived. Being the first ever half Trill host, the symbiosis committee on Trill were uncertain whether a proper blending would ever take place or that the symbiont or Isabelle would survive. Both have flourished and become a scientific curiosity to both the Trill and Starfleet.

The two previous Veran hosts were both Starfleet officers. Lyta Veran lived to the grand old age of ninety and worked her way from Operations to the Admiralty. Jules Veran had a much more jaded past, he died at the age of fifty after thirty years in Starfleet but his death was considered to be under suspicious circumstances.