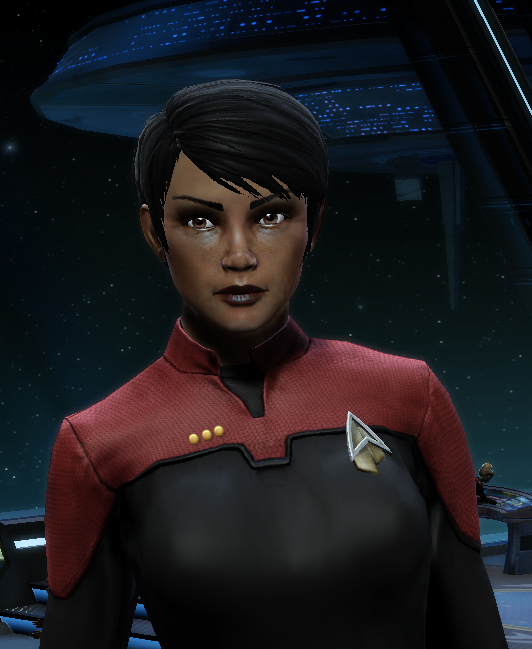 An energetic, adaptable, excitable, and cultured woman of Indian heritage, raised and educated in the south of England. Chandra made her name in Starfleet as an Engineer, but now wears the red colors of Command. Her passion for new cultures, for exploration of the unknown, for the joy of discovery, and for pushing the limits of technology and what is possible drive her ever forwards into the deep, dark unknown. Having been summoned to the Osiris Initiative on Starbase Bravo, Commander Chandra now eagerly awaits her first command.

A woman of Indian heritage and raised and educated in England, Raksha had always shown a great aptitude for engineering and technology from a young age. Excitable, charismatic, and possessed of an incomparable energy, Chandra was never happy unless her hands were deep in some contraption, pulling at cabling and tweaking at relay circuits.

Naturally then, it came to no surprise to her parents when she decided to apply for Starfleet. Her broad intellect and skill with machinery, as well as her likable and somewhat diplomatic, if brash nature ensured her success at the Starfleet Academy during her four-year tenure there.

When she was finally granted her first commission, and engineering officer aboard the USS Kingston, she eagerly rose to the challenge. Space exploration and the discovery of new and unknown wonders across the galaxy had always been a fascination of hers. She often looked up at the stars, telling her family that one day she’d see each and every one of them up close. The Kingston came with its own set of challenges and conundrums, challenges Raksha relished. She loved pushing the envelope with regards to Federation technology, adapting and overcoming issues on the fly to push the very limits of a Starfleet vessel to their absolute extreme. She was the first to offer unorthodox suggestions to her Chief Engineering Officer, Commander H’shall, many of which were taken up in difficult situations. Sometimes her solutions worked, sometimes they quite literally blew up in her face. Despite this though, her reliability for quick ideas and decisive action became a valued trait amongst the crew.

Serving aboard the Galaxy-class vessel for 7 years, Raksha’s ingenuity and frantic problem-solving skills earned her a position as the Assistant Chief Engineering Officer, eventually helping to co-lead the engineering department alongside H’shall, a position that earned her equal parts adoration and disapproval amongst the Engineering team.

Whilst some were very fond of her plucky energy and quick problem solving skills, others found her to be reckless and annoying.

In 2392, when her record fell upon the desk of Ikon Kurun, Captain of the Luna-class starship, the USS Frontier, Lieutenant Chandra was immediately offered the position of Chief Engineering Officer, a position she rather excitedly took up. Though the Frontier was a considerably smaller ship, the challenges of heading and being wholly responsible for the productivity as well as safety of the crew serving under her proved to be quite stressful indeed. At first, she struggled balancing the needs of the ship and the needs of the crew and earned a reputation for being snappy and impatient.

Though the Captain was displeased with this attitude, he respected her abilities as an engineer and, being a Betazoid, could sense her desire to do right by both him and her own subordinates.

Captain Kurun felt that Chandra was pushing herself a little too hard and was working too much purely to please him, earn his approval, and validate his trust in offering her the position. After being ordered on a two-week vacation and a regular session with a counselor, Chandra better learned how to not only balance her frantic energy with a little more tempered consideration, but also how to balance her personal and her work life a little better.

Overcoming various odds and challenges across her continued career and achieving the rank of Lieutenant Commander, Chandra became one of Captain Kurun’s most trusted advisors and confidants.

One day, Kurun called Chandra in to his office and divulged a great worry of his to her. He suspected his second in command, David Hughes, had been corrupted by the Orion Syndicate, and was feeding them information on Starfleet movements to help them avoid detection in their smuggling operations.

Working closely and surreptitiously with the Captain, Kurun was finally able to expose Hughes and, despite the man having been am apparent friend of the Betazoid’s for many years, saw to his court-martialing.

In his absence, Kurun offered Chandra the rare opportunity of becoming his First Officer, his second-in-command, provided she undergo the necessary training as per the admiralty’s requirement.

Chandra gave it thought at length, often seeking her Councilor’s advice. After much consideration however, she took up the posting and returned to Earth to undergo the necessary training.

Despite her heart still beating to the hum of a warp core and her mind ever being concerned with electroplasma and warp fields, Chandra now realized that she could possibly truly have the chance to explore and see just what there was out in the universe to discover. She could truly marry her personal and professional life in harmony. As a lover of music and a fan of different cultural compositions within the Federation, the idea of hearing the songs and sounds of new and unknown species and cultures across the galaxy utterly enraptured her.

Finally, she returned to the bridge of the USS Frontier in a red uniform and sporting the three golden pips of a Commander. She took her seat next to Kurun on the bridge and began her duties as a second officer.

Together, the crew of the USS Frontier explored the final frontiers of space for the next three years, in which Raksha continued to balance all of her interests. She would regularly practice different musical instruments in her free time and would perform with them for the whole crew, teaching them about the cultural heritage and unique compositions written for each one. Likewise, she would indulge in the musical libraries of each new species the Frontier came across, and proved to be both an excellent ambassador for the Federation and a skilled diplomat, mostly due to her likeable if excitable personality.

Despite her position as the First Officer of the ship, and there being a new Chief Engineering Officer amongst the crew to take her old post, Chandra still regularly found herself spending a lot of her quieter hours in engineering, coordinating with the officers there and enjoying her time whenever she could amongst the panels and conduits of the Starship’s interior.

On the bridge, in times when the CEO was required to be in Engineering, Commander Chandra would often man the engineering station and fulfill her duties to the ship as both a First Officer and an acting Chief Engineering Officer for the bridge.

In the mess hall, though she would often find her way around to speaking with almost everyone and anyone she could, she would regularly be seen as the only red-shirted officer amongst a sea of mustard-clad engineers, laughing and theorizing technical solutions with her crewmen.

In the year 2399, Captain Kurun called Raksha in to his office and sat her down in front of him. He informed her of a new convention being organized by Starfleet’s Bravo Fleet, The Osiris Initiative.

Kurun informed Raksha that though they both had been invited, they had been invited separately, for Commander Chandra had finally been offered a command of her own, though what that assignment would be, he wasn’t sure. Either way, the Frontier was needed on the ever-shrinking borders of Federation-Romulan space, and he would unfortunately not be going with her.

Reluctantly, Chandra accepted the offer from the Starfleet admiralty. With a tearful goodbye and a salute from her colleagues, her friends, her family, she left USS Frontier and boarded her shuttle headed for Starbase Bravo.

Raksha arrived at Starbrave Bravo to find it absolutely overcrowded with Starfleet personnel. There, she shared a room for the week-long conference with Commander Jonas Flanigan, as well as meeting Commanders Matthew Rourke and Raan Mason and Captain William ‘Dick’ Sterling at the ‘Downtime’ bar later that evening.

During the conference and at the briefing for Task Force 72, Chandra’s newest assignment under Rear Admiral Julius Woodard, she learned that the situation in the Alpha Quadrant had grown direr than even she had first anticipated.

Following the Osiris Initiative, Chandra was once more assigned to the first officer’s chair. This new assignment though carried with it an increased sense of responsibility and a challenge unlike any she had ever faced before.

Chandra now sat beside Captain Anna Cadwell, as the first officer of the USS Hyperion.