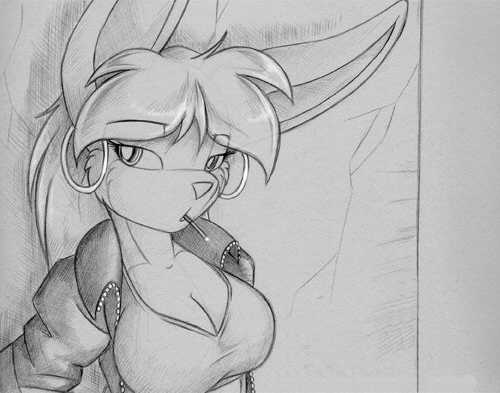 Brought into Starfleet through an ambitious officer exchange program, Valeria's thirst for knowledge landed her in several departments. Previously attached to a Science division, currently she is serving as the Operations Chief of the Asger.

Description
Valeria is a very well built, very well proportioned humanoid creature resembling an earth creature called a Rabbit. She has soft cream-colored fur covering her entire form, the traditional ‘cotton puff’ tail, and lengthy ears that perk when she’s listening, and flop when she’s not. A quirk of Ts’usugi eyes causes them to not reflect light, and as such her blue eyes seem almost like endless pools that one could drown in, if they so choose.

General Overview
Valeria is a flirtatious vixen with a razor wit and has the curves and style to back it up. You wouldn’t know it by looking at her, but she’s a top-rank science graduate, raking above the salutatorian of her graduating class on her homeworld by one of the largest margins in the history of her academy (Her achievement was not noted, however, due to the circumstances of her attendance). She’s an alluring siren of science, who sometimes gets a little too focused in her work.

She’s quiet unless she’s interested. Keep her talking, and you’re in the clear.

Strengths & Weaknesses
Valeria, despite her flirtatious and bubbly personality, is a scientific genius. Her focus to the cause can sometimes cause her to lose sight of the bigger picture, though. She often forgets to eat, or sleep, or duck to avoid incoming fire. She’s very quick to make friends, though when the subject becomes herself, she’s liable to close like a slammed book.

She’s exceptional at making friends, and has a dangerous social skill-set outside of the Science department. She’s incredibly well versed in various forms of waging warfare, historical strategies, myths and lore, and seemingly countless fables and such from her homeworld. Some might find her seemingly neverending collection of stories and such a bit intimidating, that’s if they work up the courage to speak with her.

Her people are usually overly polite, though in most circumstances are willing to play a long game. Mistakes are taken personally, and can sometimes cause little things to take greater focus then they should.

Ambitions
Valeria’s ambitions are recognition. She also wants to be recognized and noticed, and to achieve these goals with her brain, not just because she’s beautiful. Her personal goal extends to being responsible for improving relations between her people and Starfleet, but she also accepts that the odds of finding more of her people this far out of their claimed space are slim to none.

As all daughters, she wants to make her parents proud, and achieve great things without bringing shame back home. With several older siblings, the pressure is on to stand out.

Hobbies & Interests
Valeria enjoys reading the latest scientific magazines as much as the latest fashion magazines. She enjoys dancing, operating an electron microscope, exchanging fashion tips, polymer dating third rank isotopes, loud music with a killer beat, forensic autopsies, and in her spare time she collects spores, molds, and fungi. That is, when she isn’t involved with a project, or teasing the color out of an ensign’s uniform.

She enjoys personal interaction, despite her people being normally such a closed and insular people. Though, sometimes she engages in interactions just to see the results. Sometimes, it’s all just another experiment.