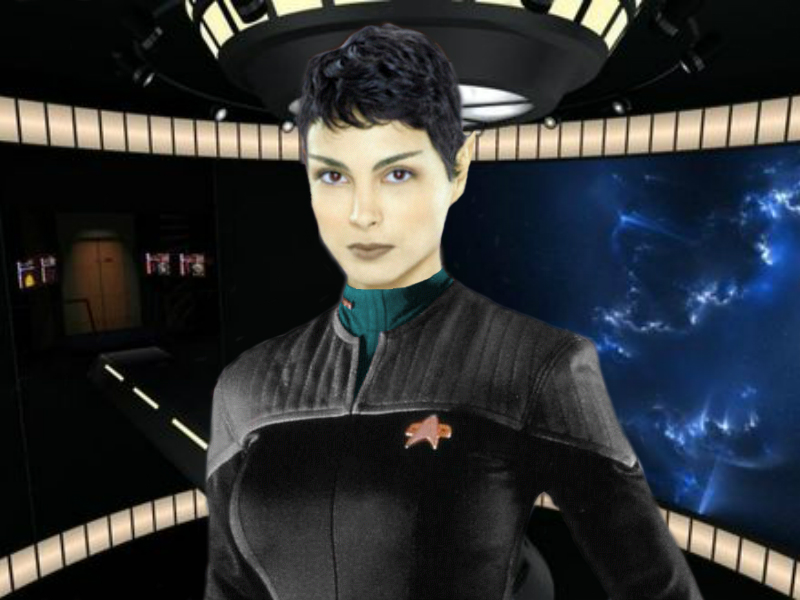 T'Penga joined Starfleet right out of the venerated Vulcan Science Academy. Her joining Starfleet was only logical for a Vulcan to keep the humans from destroying the galaxy. She knows that humans are governed by their emotions and that governance needs to stop. Her general view of humans is that they would not be so bad, if they could just learn to govern their passions. She has a tendency to be a people watcher, like most scientists she prefers to observe and report. It has been said that she has a gifted mind for Biology, in particular Exobiology and Xenobiology. She specializes in Biology, Physics, Astrophysics, Astronomy, she knows a little about Chemistry. Once her friendship and loyalty is earned she is known to be a fierce friend.

T’Penga was born in Vulcana Regar on Vulcan in the year 2264. She was immediately groomed to be a formidable scientist. All of her aptitude tests showed that she had an exceptional aptitude for Biology and how living creatures functioned. She performed her first dissection of a Vulcan while still in secondary school.

She attended an accelerated schooling program with a concentration in Biology and Exobiology. One that could keep up with her exceptional skill in these subjects. Her parents placed her on the path of Surak earlier than most children did. This was so that she could concentrate on her studies and not have to worry about emotional outbursts. She began to purge emotions at the age of 17, which is still adolescence for a Vulcan. This study of supreme logic would continue with her throughout her lifetime. It serves as the ever-present connection to her heritage.

Throughout her educational career, there was not a subject she could not master, and she was immediately sent to the Vulcan Science Academy at the age of 25. There she studied all of the sciences that she could muster. Although she excelled and specialized in Biology and Exobiology with a minor in Astrophysics. She took particular interest in Alien Biology and at one point toyed with idea of becoming a doctor. She pushed the idea of medicine to the side in favor of the idea of exploration. She felt it was her duty as a Vulcan to bring logic to the galaxy, order to chaos.

In her personal life, she comes to develop a fascination with non-Vulcans however; she believes that only the teachings of Surak will bring peace and order to a chaotic galaxy. Just as it did for Vulcan so many years before.

Just after her graduation from the Vulcan Science Academy, T’Penga experienced her first Pon Farr, she was 35 years old. She returned to her hometown, to complete the ritual with the mate her parents had selected for her, a man named S’Wek. S’Wek was the same age as her and in fact had gone to the Academy with her. He specialized in Astronomy and Chemistry. Every seven Earth years she experiences the urge to return to Vulcan for Pon Farr, where she completes the rituals with S’Wek. Although the two were bonded, they never had children. Years later the bond would be broken when S’Wek is assimilated by the Borg Collective at Wolf 359.

At the age of 40, she decided to use her love for Astronomy and Astrophysics and explore space, so she enrolled in Starfleet Academy. It was during this time she met her first humans. She believes that humans are lower than Vulcans in evolutionary standards as the former is still governed by emotions. However, she finds the human zeal for life and view of everything with wonder quite refreshing. She begins to view humans as the little sibling to Vulcans. She attempts to teach humans the path of Surak whenever she can.

During the next four years at the Academy T’Penga would come to know humans as well as other races in many ways. It was during this time that two things occurred that would shape her life to come. The first was she got her first look at a Romulan and decided that she would strive to reunify her people with their estranged cousins. The second was that she found life with humans fascinating and realized that they were not lesser but equals in many ways. Although their human centric view of the galaxy would need to change if they were to survive.

She completes her four years at Starfleet Academy with relative ease. In fact, her only issues were not with her studies but were with her acclimation to life on Earth. The constant bombardment of emotions took a small toll on her and if she did not know better she would have thought that, she was homesick. She graduates in the top of her class and is assigned to the USS Cochrane as a Junior Science Officer with the rank of Ensign.

In April of 2312 he Cochrane would respond to a distress signal on Andorra. It seemed that the Andorians were experiencing a plague. T’Penga was able to decipher that it was global warming that was causing the people to fall ill. Her plan not only cured the Andorians but it restored their atmosphere. She receives a promotion to Lieutenant Junior Grade for this great feat.

In November of 2322 T’Penga is reassigned to the USS Melbourne as the Assistant Chief Science Officer. Her reassignment came from the Task Force Commanding Officer. The Melbourne was due to be working closely with the Vulcans and he thought it prudent to have her present.

Her time on the Melbourne would be short lived, as the close proximity to her home had T’Penga wanting to purge her emotions. In 2324 at the age of sixty she resigns her commission in Starfleet and returns to Vulcan to begin her Kolinahr ritual. The ritual would be long and arduous taking twenty years for her to complete. During that time she would sense the emotions leaving her psyche and her closeness to the Path of Surak. In 2344 the Vulcan High Priestess grants T’Penga Kolinahr and seals her fate on the path of Surak. She remains on Vulcan for another year to process this achievement.

In 2345 T’Penga requests and is granted reinstatement into Starfleet. She is assigned to the USS Potemkin as the Assistant Chief Science Officer with the rank of Lieutenant Junior Grade.

Her time on the Potemkin would bring her to the edges of known space and beyond. For a scientist like her this assignment was perhaps the best she could have ever hoped for. In the middle of 2355 the Potemkin encounters a space borne race that has never had contact with a species off of their world.

When the Away Team transported down they fell ill and uncouncious as soon as they were in the presence of the aliens. It was T’Penga’s knowledge of xenobiology that allowed her to determine that a pheromone secreted by the aliens was poisonous to humans. Along with the help of the Potemkin’s Chief Medical Officer an antidote was synthezised and the crew inoculated. First Contact was then able to progress as normal. T’Penga was promoted to Lieutenant for going above and beyond the call of duty.
The year 2365 showed T’Penga being transferred to the USS Poseidon as Chief Science Officer. This was her first posting as a Department Head, and it had the added bonus that her bond mate S’Wek was assigned to this vessel as well. The calm would be short lived however, as in 2366 the USS Poseidon was assigned to join the fleet at Wolf 359 to engage the Borg.

During this battle the ship took heavy casualties to the number of about eighty percent of the crew. Among the lost was S’Wek who was not just killed but assimilated. When the dust settled on Wolf 359 the Poseidon was barely there, but she was there. What was left of her crew attributed their lives to the leadership of their acting Captain T’Penga. She was granted the rank of Lieutenant Commander for her valour.

Her encounter with the Borg had turned T’penga away from exploration and in a way she was lost. She transferred to Starfleet Academy where she became a professor of Molecular Biology and Xenobiology. She created an elective course called A Non Emotional Approach to the Scientific Method. This course had become uniquely popular and is still taught to this day.

Her experience at Wolf 359 and her experience teaching leads T’Penga to create an entirely new curriculum at Starfleet Academy. She realizes that science can be applied tactically in battle and thusly the Starfleet Scientific Tactical Program was created.

T’Penga taught for twenty years and yet she felt that it was still not fulfilling. In 2389 she returns to the stars as the Chief Science Officer aboard the USS Ark Royal. She knows that this is where the Path has led her and so this is where she must bring order to the chaos.