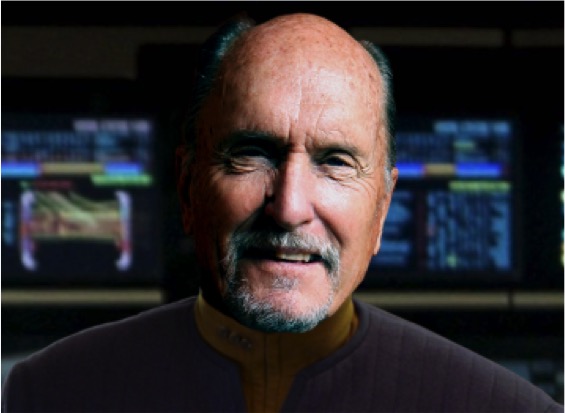 Roy Tanner is a career engineer, first enlisting as a Crewman Recruit almost 50 years ago. Over a long and distinguished career, Tanner served on numerous starships, fought in and survived several battles and skirmishes (including the Battle of Wolf 359), transferred from enlisted rating to commissioned officer status, got married (and divorced) on four separate occasions, became a father seven times over and became an acknowledged expert on the engineering systems of the Rhode Island class after serving as Assistant Chief Engineering Officer and then Chief Engineering Officer aboard the lead ship of the class for almost ten years.

Born Montana, Earth in 2335, Roy Moses Tanner was brought up on the family ranch. During his formative years, he and his older brother Henry Jr. spent their spare time working on the ranch and learning the business – their father’s expectation was that both of his sons would take over when they were old enough. Although interested in the ranch operation, what really excited young Roy was when things went wrong or needed to be fixed – it was at these times that he looked to Jim Morse, his father’s ranch manager. Morse had an uncanny knack of understanding the physical and technical requirements to solve any given problem that arose. This was Tanner’s first introduction to engineering – and he was fascinated by it.

As time went on and Tanner grew older, he began to dream of joining Starfleet and becoming a starship engineer. His father dismissed this idea to begin with, but when flood waters in Montana threatened to wash away the ranch and livestock in May 2349, and with Jim Morse off-planet visiting relatives, the 14 year-old Roy Tanner designed, constructed and implemented a set of flood defences and water run-offs himself. Not a single head of cattle was lost. Henry Sr. resigned himself to that fact that the ingenuity of his younger son would most likely be wasted running the family ranch. Reluctantly he validated Roy’s enlistment papers, and in 2351, at the age of 16, Tanner was accepted into the Starfleet Engineering School in San Diego as a Crewman Recruit.

Over the next several years, Tanner excelled in his duties and steadily rose through the enlisted rates and various engineering ratings. To say that he loved his job would be an understatement. Unfortunately, Tanner’s private life took a poor second place to his career and by 2367 he was on his third marriage. This was also the year that Starfleet engaged the Borg at Wolf 359.

By this point in his career, Tanner had been promoted to Chief Petty Officer and senior department NCO aboard the Nebula-class USS Endeavour – and although Endeavour was the sole surviving Starfleet vessel from the action, she lost fifty percent of her crew. The engineering department losses stood at over eighty percent.

Over the next two years, Tanner underwent extensive medical and psychological rehabilitation, finally coming to the conclusion that more of his team from Endeavour would still be alive if he had been the person making the decisions and giving the orders. On his return to duty, he applied to join the Enlisted to Officer Programme. He was accepted.

Tanner’s rehabilitation had been difficult for both he and his wife – and his third divorce happened soon after returning to Earth. During his recovery however, he had begun to develop feelings for his counselor – and she for him – and on his return to active duty in 2368, they were married.

Becoming a newly minted ensign at 36 years old was a difficult transition – especially when the majority of the more senior engineering officers he served under had substantially less knowledge and experience than he had. However, he followed orders, did his duty and learned how to be a better leader. He undertook post-graduate courses in counseling and strategic management whilst still keeping abreast of the latest engineering developments. Within five years, Tanner had been promoted twice and took up the position of Assistant Chief Engineering Officer aboard USS Rhode Island. The following year he was promoted again, this time to Lieutenant Commander.

In 2385, the then-Commander Tanner was transferred as Chief Engineering Officer aboard the ageing Excelsior-class heavy cruiser USS Hephaestion where he met and struck up an unlikely friendship with a young flight control ensign named Sean Gaudian. Gaudian’s cockiness and self-confidence reminded Tanner of him at that age and he used his experience to help the younger officer to manage those traits more successfully than he himself had handled them in his youth.

Tanner decided to retire in 2389, his fourth (and to date final) attempt at marriage having failed almost ten years prior. Returning to Earth, he rejoined the family business, operating the Tanner Ranch in Montana with his older brother Henry – just as his father had planned forty years previously. During his four marriages, Tanner had fathered seven children – four boys and three girls – all of whom eventually applied to and were accepted into Starfleet Academy. As time passed, Tanner watched his children develop into fine officers and begin their careers on starships and starbases far away from their ageing father back on Earth. The irony of the situation was not lost on him…

In 2399, after ten years of Earth-bound retirement, an officer from Starfleet BuPers arrived at the ranch. A new Task Force was being developed to explore the Delta Quadrant – and one of those vessels was a Rhode Island-class frigate in need of a Chief Engineer. Vice-Admiral Jonathan Knox had reactivated his reserve commission.

Leaving Earth and his beloved Montana, Tanner reported for duty aboard Apollo with mixed feelings, curious as to what this second part of his Starfleet career might bring.