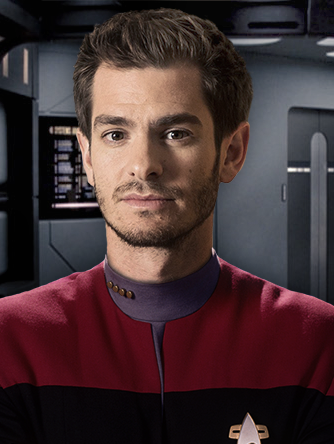 Edmund Hawthorne has enjoyed a successful career as a starship engineer and designer, involved closely in the final development and construction of the Intrepid-class. This led to his assignment as Chief Engineer of the USS Pioneer, though Command has anticipated him to move long-term into starship design and away from front-line service. As such, while nobody had anticipated the disaster that has stranded the USS Pioneer 70,000 light years away in the Delta Quadrant, if possible even fewer anticipated the disaster would lead to this young and brilliant engineer with little noted leadership talent or experience being forced to take command.

Edmund Hawthorne was born the middle child of a family with a history steeped in Starfleet. His father Abraham served on a starship, absent from the family for months at a time, but as a decorated officer with a promising career he cast a long shadow upon his children. Elder brother Tommy sought to follow in his footsteps – not just studying what Starfleet wanted, but working hard from a young age to adopt all the extra-curriculars that would prove his sense of teamwork, leadership skills, commitment and hard work. Annabelle, the youngest, pushed herself the other way, with a raw and unique talent in music. Both were doted on by their father for this, Tommy proving everything he wanted, Annabelle the apple of his eye even with her differing interests. Young Eddie was not so fortunate. Awkward and bookish, he was more like his mother, a respected astrophysicist lecturing and researching at Alpha Centauri University. He might have found succour had he followed in her wake, but he looked up so fervently to both his father and elder brother that he failed to conceive of any path of his own beyond Starfleet.

It was never enough for Abraham. Tommy looked to become a helmsman like him, follow the command track like him, which made the superior academic grades of the less confident Eddie more embarrassment than anything else. When Tommy applied for Starfleet Academy, the younger Eddie did too, and it was perhaps a source of relief that 18 year-old Tommy left for the Academy and 16 year-old Eddie did not. With the intention of showing the scientifically-minded boy that Starfleet was more than research papers and numbers, Commander Abraham Hawthorne arranged for his younger son to spend a summer shadowing an old shipmate of his on a starbase.

This worked, in that it made Eddie realise he had no interest in becoming a science officer; for all his intellect, his interests were far more practical. He might have thrived on mysteries, but he thrived more on projects he could watch from beginning to end, problems he could solve, and with all of his hands-on experience he came home and confirmed his father was right, he needed a change. Eddie Hawthorne wanted to be a Starfleet Engineer.

He made it into the Academy two years later and flourished at challenges both theoretical and practical. Never expressing interest in a career path other than engineering, Hawthorne still demonstrated an aptitude for quick-thinking and versatility that saw his instructors push him to leadership roles in team exercises. While he rose to the occasion in exercises revolving around his areas of speciality, he clammed up making decisions for other people when out of his depth. The conclusions on his records were that as an officer he would make an excellent engineering project leader even under dire circumstances, but as a Starfleet officer in more general circumstances was better-suited to providing expertise or making out-of-the-box suggestions rather than being the final decision-maker.

Ensign Hawthorne was offered a place on a design team immediately out of the Academy, but wanted more direct experience first, taking starship assignments and quickly rising to become a Chief Engineer on the small, Sabre-class USS Daisho. After this he took the opportunity to study subspace physics at the Daystrom Institute for a year, and attempted upon the acquisition of his Masters degree to secure a position on a starship design team with a former professor.

Told the design teams wanted engineers with more practical experience, a frustrated Lieutenant Hawthorne sought the first posting he could find to an exploration ship, and was duly made the Chief Engineer on the USS Winchester. Under Captain Wilder, Hawthorne finally travelled beyond Federation borders into unknown regions of the Beta Quadrant on a two-year expedition. Despite bonding closely with the crew, and an offer to stay on with the Winchester further, with some regret he accepted a post to Utopia Planitia as Refit Manager.

Later his ambitions of starship designs paid off, with dividends, when the offer came through to lead a design team at Antares Fleet Yards. For the next four years, Hawthorne directed development and design of the integration of bioneural circuitry in subspace propulsion systems, including a stint supervising its implementation with the construction of the new Intrepid-class starships. It was here he met his future partner, Cam Thatcher, who had been involved in the initial development of bioneural circuitry and joined the development team to aid in integration work.

The two initially clashed in their competing priorities, where Thatcher wished to push the boundaries and explore the full capacity of the circuitry while Hawthorne was more conservative. His field experience had kept him aware of the practical necessities, rather than ambitions which might endanger a ship’s systems on operations. Thatcher successfully drove Hawthorne to more audacious work in their development, however, and over time the two grew into a partnership that turned personal as well as professional.

After four years, the development project was concluded with the commissioning of the Intrepid, Voyager, and Pioneer. Hawthorne, however, was dissatisfied with the standards of their work with the circuitry integrations, and requested delays to the launches in order to improve efficiency. When this was rejected, he took another tack. Although he had the opportunity to join the team working on the Sovereign-class project, Hawthorne requested a chance to serve on one of the new Intrepid-classes for up to a year to observe his own work in the field and make informed recommendations on future developments and refits, as well as to assuage lingering concerns in the Starfleet Corps of Engineers on the field deployment of bioneural circuitry. The request was granted, no doubt smoothed over by the assignment of Captain Wilder to the USS Pioneer, where he was posted as Chief Engineer and second officer.

This caused some division between him and Thatcher, who had already gone on to join the Sovereign team. Hawthorne’s diligence was unnecessary, they insisted – or, rather, fussy and self-indulgent. No design work would ever be finished with Hawthorne’s attitude and every project had to be let go of, but Hawthorne dug in his heels and insisted he couldn’t let Captain Wilder set off on a dangerous mission while he harboured even the slightest concerns about the ship, however broadly theoretical they were. Thatcher reminded him nothing was going to blow up on one mission and the most Hawthorne would do was make systems observations which could be gathered by any engineer making a competent report. The two argued quite bitterly, and left on poor terms as Hawthorne departed the Sol system for his new posting.

Hawthorne’s time as chief engineer would be brief. His time on the Pioneer would not be. The ship’s first assignment to hunt down a Maquis ship in the Badlands ended in disaster, the Pioneer catapulted 70,000 light-years away to the other side of the galaxy, in a crisis which killed multiple members of the crew – including the XO and, ultimately, Captain Wilder. As second officer, command of the Pioneer has fallen to Lieutenant Commander Hawthorne, as has the duty of bringing home the ship, and the mixed crews of Starfleet – and the Maquis they were once hunting.