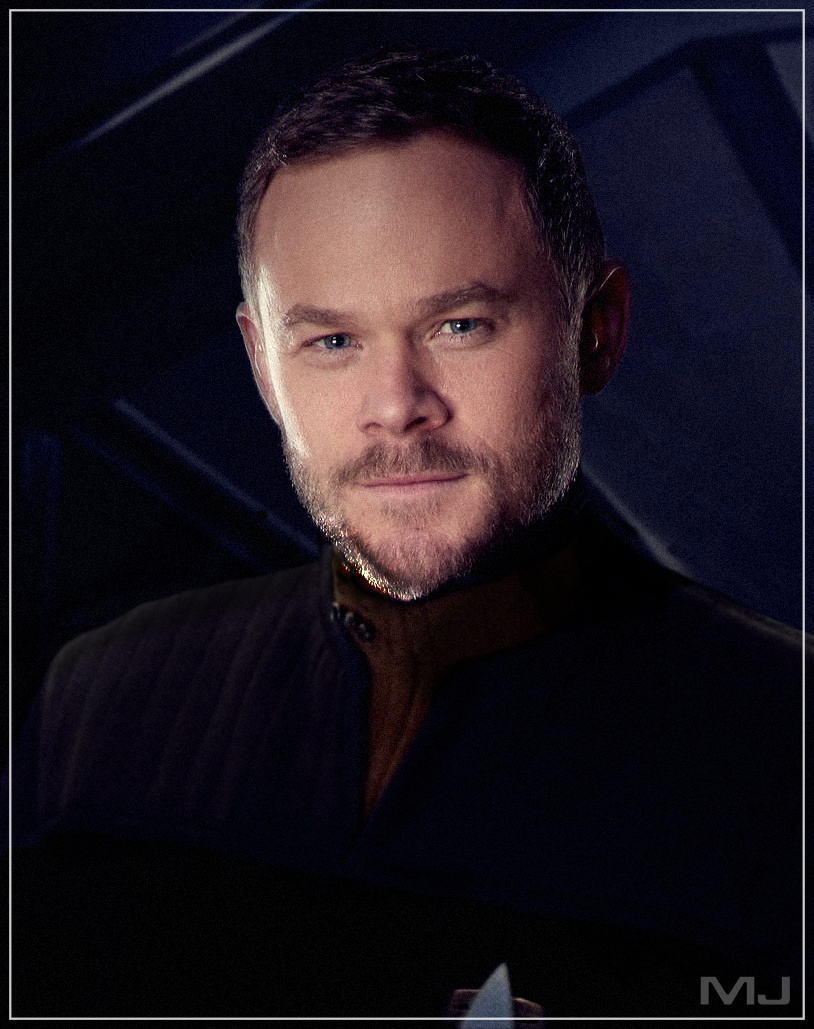 Lucas Rider is a highly experienced Starfleet officer and the current Chief Security Officer of Deep Space 12. An experienced officer and a veteran of the Dominion War, since the end of the it he has served on over twenty different assignments, all with distinction and valour. He is known for his fair and strong leadership and high level of skill in managing large security detachments. He has also worked for Starfleet Intelligence on a range of covert operations.

Lucas was born in London on Earth on October 9th, 2350; however, he grew up on the move due to his parents’ jobs as Federation politicians. Lucas rarely had time to make any close friends and as such is extremely close to his older sister Laura and younger brother Alfie. Eventually due to their jobs settling down at this time, Lucas’ parents were able to raise their children back on Earth after what seemed like forever touring various Federation worlds for several years. The Rider family were able to move back to their old home and settle in to a less disruptive lifestyle. As a teenager, Lucas enjoyed many forms of sports and became quite a keen and talented athlete.

Lucas joined Starfleet after he sister joined two years before him. He spent four years at Starfleet Academy studying security and tactical classes while also taking classes in diplomacy and languages. His instructions noted he showed his parents’ flare of understanding political and diplomatic concepts. Lucas was able to combine many of skills and as such developed a talent for decryption.

Following his graduation he was assigned as a security officer on board the USS Woolwich (NCC-61240), a Nebula Class starship. He remained on the Woolwich until 2375 when the ship participated at the Second Battle of Chin’toka. The Woolwich, like the rest of the allied fleet, was lost. At the time of the Woolwich’s destruction he had achieved the position as assistant chief security and tactical officer.

After being rescued in an escape pod by a Klingon bird-of-prey on the edge of the Chin’toka system, he was approached by Starfleet Intelligence to join a special operations team. He joined as an undercover agent and it wasn’t long until he participated in a number of covert missions in to Dominion territory. Once the war had ended, he requested a transfer to return to a security and tactical posting. His commanding officer at the time, Captain Amanda Walker, was reluctant to lose one of her finest officers but agreed to the transfer knowing Lucas craved to return to starship duty.

For the next ten years Lucas transferred from different ships to help with officer shortages and to share his experiences. At one point he was serving as chief of security on Starbase 17, under Admiral L’Tari. A diplomatic conference was held on the starbase in 2382, which was attacked by a dissident faction of the Jontarian race. Rider, while negotiating for the lives of the hostages, discovered the proper cultural practices which led to him gaining the trust of the dissidents in ending a siege on the starbase’s promenade, ending it without loss of life.

Eventually Rider held the position of Chief Security & Tactical Officer for three years, his longest assignment since the end of the Dominion War. He was assigned on the USS Collegiate (NCC-77007) in 2384 where he once again served with distinction under Captain Carrie Parkshaw. Parkshaw would come to trust Rider’s judgements and opinions on situations and as such both became close friends. Rider would also become close friends with the ship’s chief flight control officer, whom he would later find out was the youngest brother of the man who would go to marry his sister the following year, one Lieutenant Horatio McCallister. While on the Collegiate, McCallister and Rider shared in their joint interest of orbital skydiving and adventure holo-novels. By the end of the year the two men soon found out they would become family through their siblings.

Nevertheless, McCallister soon left the Collegiate due to personal conflicts with the ship’s new first officer, in due course Rider became to feel the same towards Parkshaw’s first officer and puts in for a transfer too. He states his reason as he’s unable to serve under an Executive Officer who was reckless in carrying out an away mission. The away mission in question ended with the death of several of Rider’s security officers that could have been prevented if the first officer had listened to the advice Rider had given him. After the inquest in to the deaths, Parkshaw is left without a first officer and one of the best security chiefs she had served with. Rider is approached by Captain Walker to return to Starfleet Intelligence. He agrees and ultimately finds himself on Romulus, spying on a former ally.

Rider conducted classified missions on Romulus, partly supporting the Romulan dissident movement from a distance as well as performing reconnaissance on the political structure of the new Romulan government. At the end of 2385 he is ordered to return to Starfleet Headquarters to be debriefed and giving a new assignment. He was temporally assigned as the Chief Security & Tactical Officer on board the USS Indefatigable (NCC-69851), as it is sent to become a support ship to Deep Space 10. He later finds out that Walker had pulled in some favours to have him assigned as Security Chief at Deep Space 10.

After several months on Deep Space 10, Starfleet had decided to re-assign Lucas once again. This quick re-assignment was becoming quite frustrating for the security officer. He had just set-up a comprehensive security division on the Nor-class station and was finally enjoying his work. While on Deep Space 10, he and his security department were able to arrest a ring of drug smugglers who were trying to use the station as a staging ground into the Gavarian Corridor. They also arrested several known con-artists that had tried to use fake identities when they boarded the station. For his excellent leadership on these occasions and others, Lucas is commended and honoured with several awards. Even within a short amount of time, Lucas’ security methods and measures are noted to be extremely effective. That said, it was shock for many on the station when he was ordered to join the crew of the recently refitted Galaxy class, USS Venture (NCC-71854) as its chief security and tactical officer. Lucas had literally less than a week to prepare DS-10’s security department for the change of leadership (particular as three members of his staff were being assigned to Venture too) and outfit the Venture to his security standards. However in five days he made the impossible possible and was ready to join the new flagship for the Fourth Fleet’s Task Force 47. He left behind one of his protégés, Linus Caldwell, to carry on the work as the station’s new security chief. Before their departure Lucas’ new security measures were tested by the ship’s new First Officer and they proved to be completely effective and passed the test with flying colours.

A year under Captain Hunter on the Venture and Lucas’ brother-in-law asked him to join him on Starbase 378. He would be a security chief again and assisting in dealing with security matters along the Federation-Cardassian border. Joining the starbase in 2387, he started to get a reputation for himself as a strong investigator and trained a number of security officers underneath him. Captain McCallister ended up assigning a group of cadets to Lucas as a result of his hard work. He wanted to give him the chance to share with newer recruits what it meant to be an officer.