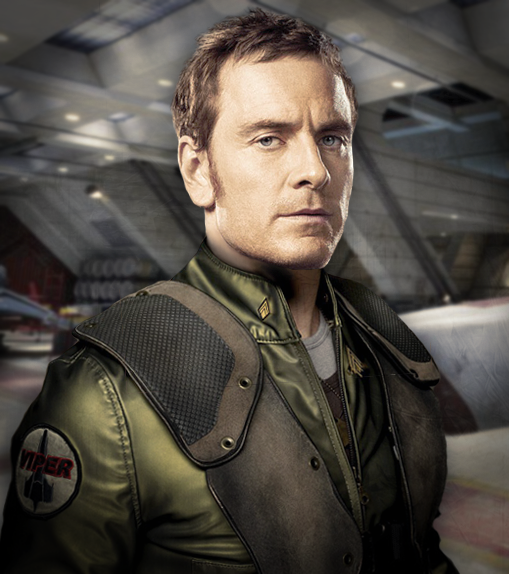 Arthur "Lockdown" Theron's career has been tumultuous, to say the least. From humble origins on Leonis, he rose to become a talented and successful Viper pilot, well-connected in the upper echelons of the Fleet thanks to close friendships and a marriage into an Admiral's family. Following a flight accident in recent years, he has fallen out of favour with these crowds, relegated to a post as CAG on a minor Battlestar - until the Cylon invasion, and the scramble for crew aboard the Battlestar Artemis.

Born into a working class family on industrialised Leonis, Arthur’s was a difficult upbringing. Joining the Colonial Fleet was his best chance to get out, though he anticipated entering the service through the enlisted ranks, likely as a deck hand. Only luck can be credited for his aptitude scores catching the attention of a recruiting officer who gave enough of a damn to enter him for pilot training – and thus an officer’s track.

While Theron had a natural talent as a pilot, he struggled with the culture. Most of his colleagues shared few of his working class experiences, and he had difficulties fitting in with a rough-and-tumble approach to most problems. Between his own temper and the provocation of those around him, he began his career racking up multiple black marks for discipline; his callsign was earned with how much time he spent in the brig.

Only by the intervention of his wingman, Lieutenant Nick ‘Chains’ Drakon, did Theron not wash out within a few years or be consigned to mediocrity forever. Drakon was a native of Virgon, and both charming and well-connected. Any rough edges between the two of them during his assignment as a Viper pilot on the Battlestar Triton were smoothed out during a tour hunting pirates on the outskirts of Helios Delta, and so when Drakon was earmarked for a more prestigious assignment, he dragged Theron with him.

Lockdown was unenthused when Chains made him the offer; a tour at Picon shipyards sounded deeply boring until Chains pointed out the perks. They would be with one of the elite squadrons destined for far greater tasks than CAPs, though the precision and performance flying necessary during military celebrations was not an encouraging prospect, nor the likely societal obligations that would come with. Only when Chains told him that two years of that would have him set for the rest of his career did Lockdown acquiesce.

It would prove to indeed be a life-changing posting, as it was how Lockdown would meet his wife. Chains introduced them, in fact; Nick Drakon went far back with multiple important military families, including the family of Admiral Straton. His daughter Iris was a civilian, but a successful professional in her own right and an old friend of Chains.

While Admiral Straton clearly wasn’t thrilled at the eventuality of his daughter marrying a pilot from the wrong side of the tracks, he was not an unreasonable man. With both the Stratons and Chains supporting his career, Lockdown moved from performance flying to a tour as a test pilot, to eventually serving as deputy CAG under Chains himself on the Battlestar Acropolis. Married life seemed to agree with Lockdown, and settling in his career likely helped; his hair-trigger temper reared its head less often, and his manner became more of a controlled, austere professional than the either volatile or detached young pilot of years gone by. Drakon took great pleasure in taking credit for this transition, and indeed both men had been considered qualified to make Acropolis’ CAG.

By then both were married, both men had children and were in their early thirties, and Chains talked effusively of this being their last tour as pilots, because it was only natural that he would aspire to the admiralty. Lockdown had more serious reservations, having barely adapted to the pilot culture without moving into being a command track, but kept his counsel as usual.

The accident on a routine atmospheric patrol on Hibernia was formally not Captain Arthur Theron’s fault, but it nevertheless resulted in an unconscious Major Nick Drakon’s Viper being shot down over open water to avoid a crash within an inhabited settlement. That was enough to nuke the upward momentum of Lockdown’s career, regardless of his legal innocence. For all his wife’s connections, he had still shot down the grandson of an admiral; for all his skills as a pilot, he had still shot down his wingman.

Since then, Captain Theron has languished as the CAG on the inauspicious Battlestar Bellerophon. The posting keeps him away from his family, and despite his enormous reluctance to become entirely reliant upon his wife – and thus have to contend with the society she kept – he has sorely considered resigning his commission.