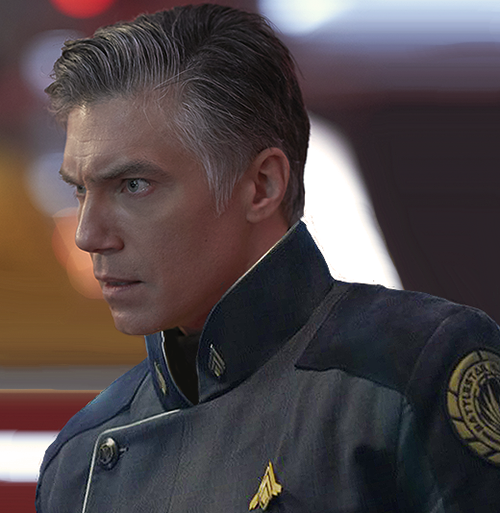 Tyrus Craine is the current XO of the Battlestar Artemis after being chosen by Colonel Celeste Porter from the survivors of the Cylon attack. Formerly a black ops officer, FTL expert, and XO of the Battlestar Hades, Craine was blacklisted and his career stalled during a black ops/FTL mission gone awry. As a result, he was relegated to logistical duty, by himself, at a mothball yard tending to broken down, unused Colonial ships.

Tyrus Craine was born on Tauron the son of two Vergis Corporation engineers. Early in his life he diverged his interests from his parent’s careers, much to their displeasure, and showed a deep interest in FTL technology. This was a point of contention with his AI-first minded parents who felt that FTL was a technology that had little to no practical use in the Twelve Colonies or their future. To spite them, Tyrus joined the Colonial Fleet at 18.

Once in the Colonial military, Tyrus earned his junior pilots wings; something that he would very rarely put to use during his entire tenure in the fleet. After making lieutenant, Tyrus was reassigned to black ops FTL development where the primary use would be to spy on the never-heard-from Cylons. After many years of service, catapulting up the ranks, it was as XO of the Battlestar Hades where his career would come to a screeching halt.

During a black ops mission, the Hades was to use an experimental FTL modification which would allow the ship one quick FTL jump without the necessary cool down. The orders from the admiralty were to initiate the jump deep into Cylon territory while Tyrus operated the FTL drive, gather as much intelligence as possible, and then after only a few minutes make the jump safely back to Colonial space. The CO backed out at the last minute due to fear of Cylon engagement and blamed the failure to follow orders on Tyrus’ inability to operate the FTL drive correctly.

Such failure on a black ops mission was unacceptable, and Tyrus was reassigned to the Hebe Mothball Yards where he spent 3 years as the sole caretaker of many of the fleets mothballed ships. During the Cylon nuclear attack on the Colonies, Tyrus happened to be in the CiC of the decommissioned Battlestar Artemis.