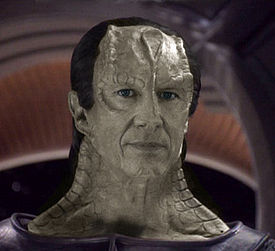 Sall Omec is the intelligence officer of the Cardassian warship Damar. A former hero of the Dominion Occupation of Cardassia, he has purposefully stunted his own career in the Central Command for unknown reasons.

Sall Omec is a Cardassia who was originally a member of the Obsidian Order. Placed into deep cover within the ranks of the Central Command to sniff out subterfuge, after the Order was nearly destroyed in the Battle of the Omarion Nebula, Omec remained under cover. Due to the unfavorability rating of the Obsidian Order even years later, his secret has been his own to keep and has forced him to stunt his own career within the Central Command.