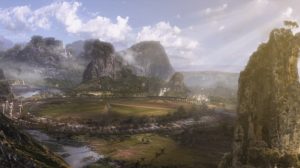 Alexander Omec was born on Terra Nova in the year 2349, growing up on his family’s farm on the outskirts of Logan City. His family were direct descendants of one of the original settling families of Terra Nova. His family, and the land they farmed, were the ones assigned by the original colony parameters to bring and plant the first Earth crops on Terra Nova including corn, wheat, and hops; something they continued hundreds of years later on the same land. Because of their lineage, the Omec family obtained certain social clout on Terra Nova where descending from the original colonists is seen as a social badge of honor.

While Alexander enjoyed life on the farm, like many in his situation since the dawn of mankind, he longed for more with a strong wanderlust. Desiring to see more and with a love of science, Alexander applied and began at Starfleet Academy the fall before his 18th birthday.

Alexander graduated from the Academy in 2371 with a degree in geology – a call back to his life growing up on a farm in the rural tendrils of Logan City – after finishing an extended sophomore year which included extensive fieldwork on Vulcan. His first posting was as an ensign on the brand new Intrepid-class USS Pioneer. The Pioneer‘s first assignment was to test the long term durability of the Intrepid platform, and as such was assigned to an 8-year deep space assignment where it would leave Zakdorn and head towards the Delta Quadrant for 4 years, turn about, and make a return journey towards Deep Space 5. As a young ensign on such an exciting journey, Alexander excelled in all aspects of his job. He found that many of his crewmates, particularly the younger ones like him, did not enjoy the thought of deep space assignments once the reality set in.

Alexander slowly moved up the ladder of responsibilities on the Pioneer and really enjoying his time in deep space. After a few years into the Pioneer’s mission, tragedy struck as it often does on deep space assignments. The Chief Science Officer and eight others were killed in an accident while surveying a planet. This somber moment gave Alexander his first leadership opportunity when he was tasked to step up and be the ship’s new Chief Science Officer.

While the rest of his time on the Pioneer was uneventful, when the ship returned to Federation space many of the crew were reassigned. Part of his reassignment was to take up the Chief Science Officer position on the Nova-class USS Hawking; however, due to the ship’s size and mission, Alexander was also given the opportunity to double up and serve as the Hawking’s first officer, as well.

It was during his time on the Hawking that Alexander realized that while he and his fellow crew on the Pioneer were away on deep space assignment that the Dominion War had taken a monstrous toll on Starfleet. Many of the crew he served with on the Hawking were battle scared and worn; something he had to keep in mind often when dealing with them in his capacity as first officer. Slowly the crew settled into the Hawking as Starfleet’s mission returned to one of peaceful exploration, but it was a process and one that Alexander wasn’t sure how to assist with as it was a mission he had never left.

Alexander’s next posting was to the Luna-class USS Europa as first officer. The Europa was assigned to deep space exploration near Gorn space. Alexander excelled as first officer and his science background was invaluable to the Europa’s mission. A few years into the mission the Federation learned that the Romulan star would go supernova, but ordered the Europa to continue her mission as she’d largely be more useful there than back in Federation space. It was another major event in Federation history that Alexander would be far from home for and relatively disconnected from which was becoming a theme of his career.

Captain of the Venture

The Europa returned a year after the Romulan star went supernova. The crew was unsure of their future; Starfleet was pulling back its resources, the Federation was becoming more isolated, and many members of Starfleet were unsure of their direction. However, for all of his experiences in deep space, Alexander was given a command of his own. The Galaxy-class USS Venture had just finished a full refit and repair at McKinley Station and was taking on crew. The Venture was to complete a 5-year deep space assignment through what was now space claimed by the Romulan Republic. After its first 5-year mission, the Venture returned to McKinley Station for six months of refit, repair, and recrew and was assigned on another 5-year mission under Captain Omec. This time she was to head towards the edge of the galaxy in the “southern” part of Federation space. Upon return, the Venture underwent another six months of refit, repair, and recrew before being sent on a third 5-year mission under the command of Alexander. This time she would be heading out into uncharted space past Deep Space 12 adjacent to Kziniti And Breen space.

Captain Alexander Omec is the current commanding officer of the Federation starship Venture. A veteran of deep space, long term exploratory missions throughout his career, Captain Omec has commanded the Venture for over 11 years, through two separate 5-year deep space assignments.