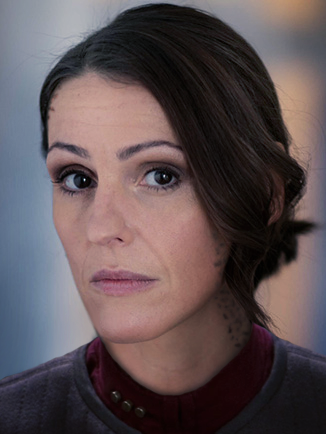 Commander Sarrick is an experienced strategic and intelligence analyst and officer. After a rocky start to her career laden with a spotty disciplinary record, the Dominion War reportedly filed off these rough edges. Since then she has served in a variety of roles, but in most of them has taken some degree of responsibility for strategic and intelligence concerns for entire sectors, projects, or task forces. Her brusque and no-nonsense manner has held her in good stead through her work, though has made her as many enemies through her personal manner as it has made her allies through her success – across multiple borders.

Born to an affluent family on Trill, Katal Sarrick enjoyed an indulgent childhood. Wanting for nothing, even by the standards of the Federation, hers was the sort of bright intellect where she could excel her way through her studies with little effort. This lackadaisical attitude gave her little interest in the Symbiotic Committee’s Joining Programme, and her ambitions towards service in Starfleet manifested more out of wanderlust than a desire to serve.

It was thought the Academy might knock some sense into her, but Sarrick demonstrated enough aptitude to graduate in the top quarter of her class without too much personal application – much to the frustration of professors or mentors, who thought she could be truly brilliant if she developed a more robust work ethic. Instead her time was laden with social escapades, sporting interests, and even a stint on the Academy newspaper, where she clashed with staff by writing comedic poetry which also skewered their policies.

Again, little changed once she graduated. She served on the Mercury, and developed a work hard, play hard attitude which had her bonding closely with her crew through the difficulties of the Klingon War and the Battle of Sector 001. The latter earned her a commendation, promotion, and a lateral move to become the ship’s tactical officer – right at the outbreak of the Dominion War.

Those long years finally brought focus to Sarrick. The Mercury spent much of the conflict on the front lines, and endured heavy losses. Crew with whom she’d grown close suffered, were wounded, and died. Soon after the conflict she took a transfer to Starbase Lexington, then on the Cardassian border during the recovery process, and in her increasing sobriety and maturity gave commendation-worthy advice to staff officers.

This brought her to the attention of Starfleet Intelligence, who had considered her as a candidate for their ranks but held off due to the war and aftermath. Formally, Sarrick served as an analyst at Intelligence Headquarters for four years, though gaps in her records infer a certain amount of field activity. This also brought her into the periphery of seasoned Intelligence admiral Falco Tauvits. Once Sarrick requested a return to regular Starfleet service, he offered her a post on his staff at Task Force 33.

It was expected she would stay with Admiral Tauvits upon his transfer to Task Force 72, especially with her experience with the Cardassian border. Instead, Lieutenant Commander Sarrick has been assigned to Deep Space 12. This still likely has something to do with Rear Admiral Tauvits.