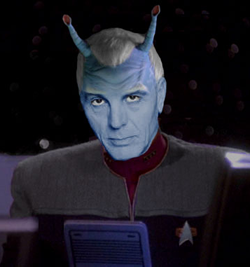 Vice Admiral Viran is a seasoned Starfleet officer and captain. He served much of his early career as a science officer in several specialized teams all throughout Federation space helping to add in the discoveries of many different fields of science.

Vice Admiral Viran is a seasoned Starfleet officer and captain. He served much of his early career as a science officer in several specialized teams all throughout Federation space helping to add in the discoveries of many different fields of science. His specialization, astrophysics and general spatial phenomena, proved to be an excellent addition to each team he served. During his sixth year in service in Starfleet he petitioned for a tenure of leave in order to return to Earth to continue his education; this time as a law student at Starfleet Academy. After a few years as a student he graduated with a juris doctorate in intergalactic and interal Federation law and politics hoping it would help him later in his career. From there his career took several drastic changes.
When he returned to regular fleet duty, Viran expressed interest in becoming a bridge officer his career quickly grew from there. Soon after he became a senior officer aboard a starship — science division — and eventually obtained his own command. After eight years in command of the USS Zhukov, with the reassignment of much of his senior staff as well as the ships patrol area, Viran decided to take a different direction with his career applying for a position as a prosecutor for Starfleet JAG. This, perhaps one of his most noted duties of his career, earned him top honors and notification at Starfleet Command. During the re-emergence of the Romulan Star Empire to the galactic scene in the mid to late-2360s, he was assigned mainly to the Starfleet JAG Corps Headqarters on Earth. It was also within this time he was promoted to a position as a judge within the JAG department overseeing many Maquis trials.

When the Dominion War erupted onto the Alpha Quadrant he was put back in command of a starship. He served in that position commanding task forces of ships until the war ended earning several battle decorations. After the conclusion of the war, he drifted around in several admiralty positions until returning to the JAG department for a year as a chief judge. Finally, the proposal of Deep Space 13 came to life, where he was stationed as base commander while maintaining command of the Fourth Fleet’s Task Force 38.

After several years in command, following a controversial mission of the USS Ares in the Omega Antares Sector and the resulting shakeup in the area, Viran’s command was revoked and he was reassigned back to Starfleet JAG. After spending nearly two years as assistant chief JAG on Earth he was recalled back to the field to retake command of Task Force 38 in 2386.